**This post contains affiliate links, and I will be compensated if you make a purchase after clicking on my links.

I am a child of the seventies and as a kid I enjoyed doing macramé with my mom and it was also a favorite summer camp activity. First, I am going to go over what you need to know to get your macramé project started. Then the focus of this post will be on how to tie a square knot.

Getting Started with Macramé

There are three things that you need for most macramé projects.

For this demonstration I am using cord from a kit I purchased from Amazon. The kit comes with 20 m of several different colors of cord. I chose to use a dark green cord and a light green cord so you can tell the difference between the two in the pictures. I also used a key chain that came in the kit. To keep the project in place, I scotch taped the key chain to a scrap of foam core board.

How to tie a macramé square knot

When you are tying a macramé square not it is best to tape down the middle or filler cords. For this example there are two cords. I taped mine down with scotch tape but as I mentioned above, you can also use tape. Here is how you tie a square knot.

If you would like a pdf handout that shows these steps in more detail, it can be downloaded from the Dabster Resource Library. Simply subscribe and you can download any of the resources in the library.

You can see the completed sequences of square knots in the picture below. The top one is made by brining the the light green cord across first. The back is looks like the sequence at the bottom of the picture. When I tied that one, I brought the dark green knot across first.

To do these macramé projects, I had to refresh my memory and I found these sites and YouTube channels helpful. 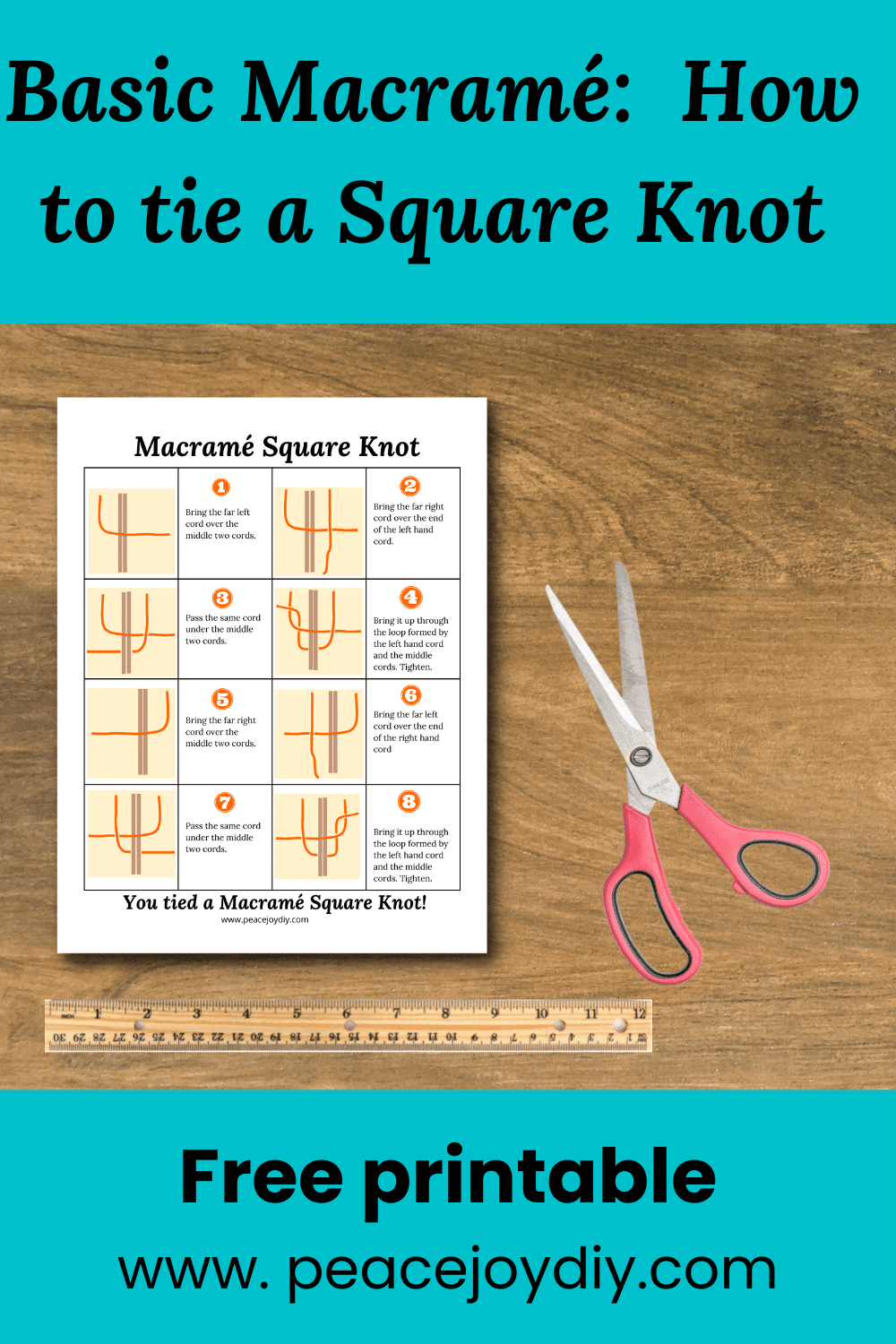 We use cookies on our website to give you the most relevant experience by remembering your preferences and repeat visits. By clicking “Accept”, you consent to the use of ALL the cookies.
Do not sell my personal information.
Cookie SettingsAccept
Manage consent

This website uses cookies to improve your experience while you navigate through the website. Out of these, the cookies that are categorized as necessary are stored on your browser as they are essential for the working of basic functionalities of the website. We also use third-party cookies that help us analyze and understand how you use this website. These cookies will be stored in your browser only with your consent. You also have the option to opt-out of these cookies. But opting out of some of these cookies may affect your browsing experience.
Necessary Always Enabled
Necessary cookies are absolutely essential for the website to function properly. These cookies ensure basic functionalities and security features of the website, anonymously.
Functional
Functional cookies help to perform certain functionalities like sharing the content of the website on social media platforms, collect feedbacks, and other third-party features.
Performance
Performance cookies are used to understand and analyze the key performance indexes of the website which helps in delivering a better user experience for the visitors.
Analytics
Analytical cookies are used to understand how visitors interact with the website. These cookies help provide information on metrics the number of visitors, bounce rate, traffic source, etc.
Advertisement
Advertisement cookies are used to provide visitors with relevant ads and marketing campaigns. These cookies track visitors across websites and collect information to provide customized ads.
Others
Other uncategorized cookies are those that are being analyzed and have not been classified into a category as yet.
SAVE & ACCEPT
Scroll to Top
Skip to content